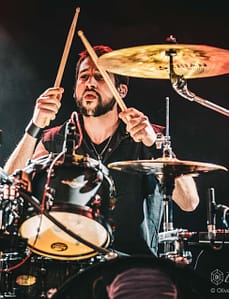 FAVOURITE MOVIES: The Lord of the Rings, Gladiator, Robin Hood, Schindler’s List, Fury, Armageddon, The Others, The Silence of the Lambs,

It all started at the age of about 11, I remember that I usually spent hours in front of the TV watching MTV waiting for the song: “in the shadows” by The Rasmus and when it finally came on, my eyes were bewitched by the drummer, my head began to follow the rhythm and my hands in the void moved and imitated those movements. A short time later I enrolled in a music school and that’s where my passion actually started to branch out. I studied, in total 7 years, in two different schools, I owe everything to my teacher who followed me scrupulously and to my father who accompanied me to the lessons and stayed for hours waiting for me in the car, without them I would not have been able to cultivate my passion. My playing style has been influenced a lot by bands like Metallica, Queen, Iron Maiden, Slipknot and Rammstein. In 2010 I joined my first band, we were a group of friends passionate about music and that’s where unpublished live experiences, videos, and discs arrived. In 2015 supported by two friends Destefani Denis and Zuech Filippo we created the YouTube channel: “Sebastiano Dolzani drums”, which is still active today. I am currently the drummer of three tribute bands to Evanescence, Pantera, and Nomadi. Playing with so many different musicians there is always something new to learn from everyone. In July 2020 I was contacted by the band Secret Rule and from this point, the story has yet to be written…