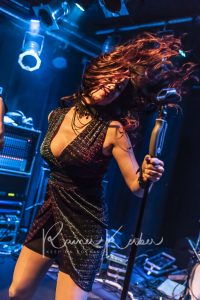 Within Temptation – The Unforgiving, The Silent Force

A LITTLE ABOUT HER:

I’m an Italian singer and songwriter.Since I was a child, I spent most of my time in singing (my mother called me “cicada” LOL) and dreaming (often daydreaming).I started to sing when I was 2 years old, I still have recordings that proves I was singing all the time!I was almost 15 years old when I joined my first rock band: we didn’t play covers but our songs.

I was a very good student at school and I always had the best school grades. Since I was a child, I believed in aliens (I hoped the aliens would have come to take me away from the Earth) and in fairies; I am fascinated by fantasy worlds, time travels, parallel universes and similar things.

I founded the band Kyla Moyl in 2004 and I made a demo of 5 songs. For many years, until 2010, I changed a lot of band members because I didn’t find the right lineup to push the band ahead.

Meanwhile I tried to join different projects of different genres as well. I sang 5 songs for a solo Italian project called Limite Invalicabile available on i-Tunes; I wrote the song Visione. But this wasn’t my path, though. I always hoped to find someone to arrange my metal songs and I kept writing. Then I was chosen for singing the main theme of the Italian version of Hello Kitty called Imparando con Hello Kitty; I also sang other songs of the episodes (you can find them on YouTube).

At the end of 2013, I had a call from Andy Menario (we’ve already met in 2002 in a temporary symphonic metal project, but then we took a different roads). Andy asked me if I was available to found a new band: I was, and I sent to Andy all my old songs. This is how the first Secret Rule album Transposed Emotions was born… and the rest is history!