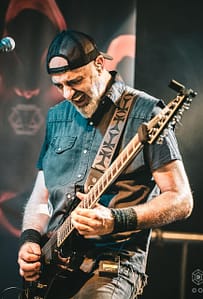 Within Temptation – The Unforgiving

FAVOURITE MOVIES: The Name of the Rose, Pulp Fiction… sorry, I don’t remember the title of other movies 😀

I was a lazy boy, I wasn’t born to study. I started to play when I was around 15 years old, intrigued by Black Sabbath and Scorpions. As an adult, I discovered the Opera making my appearance at the Rome Opera House. I started my journey into music with doom metal, approaching to the sounds of Candlemass and Warlord, to end into the world of Celtic acoustic melodies. After a period of playing cover songs from classic rock to dance, I came back to play metal, discovering again the heavy sounds in my band Martiria, and I was able to collaborate with Vinny Appice, Carlos Cavazo, Jeff Pilson and Carl Sentance, like an author too. In 2014, I was tired to listen to what the modern metal scene had to offer, so I became co-founder of Secret Rule. My principal aim was to create music to listen to during my endless days in Rome! I have two children, two cats and a partner. I’m a calm and jovial person!